Outing to Greyabbey – And What’s Next?

Randalstown Historical Society’s annual outing, held on Saturday 1 June, was to the village of Greyabbey on the Ards Peninsula. The first stop was Grey Abbey House, home of the Montgomery family who have lived here since the 17th Century. We were given a warm welcome and the Gardener led us first on a tour of the gardens, in particular the area dedicated to plants from the southern hemisphere. This was followed by a fascinating tour of the splendid Georgian house. We enjoyed a delicious lunch before heading over to the ruins of Grey Abbey itself where a volunteer guide from the Friends of the Abbey group told us something of the abbey’s history. Close to the abbey is a well-presented interpretation centre and a beautiful physic garden where volunteers tend many of the herbs which would have been grown in the heyday of the abbey. There was also the opportunity to explore St Saviours Parish Church before bringing our tour to an end. All in all an enjoyable day out and even the weather was on our side! 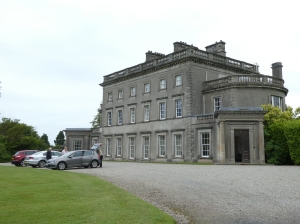 Coming up in later in June, Randalstown Historical Society and Tidy Randalstown will jointly host 2 walking tours of Randalstown with the theme of horticulture and history as part of the annual Arches Festival. The tours are free but must be booked in advance with the Arches office on 9447 8471.

25th Anniversary
The 2019-2020 season will mark 25 years since the founding of Randalstown Historical Society. Our first gathering of the new season will take the form of a celebratory event to be held on the afternoon of Saturday 14 September at the Station House in Shanes Castle. Further details of this later.

Image | This entry was posted in Uncategorized. Bookmark the permalink.